Breeds of Sheep with Facts and Characteristics

Sheep is a quadrupedal, ruminant mammal so, the farmer generally keeps it as livestock. Its scientific name is Ovis aries. There are almost 1000 breeds of sheep in the whole world but some breeds of sheep are the result of mixing two different breeds. Sheep have been helping with agricultural purposes for decades.

An adult intact male is a ram, a male which gets castrate is wether, an adult female is a ewe and a young sheep is a lamb. In appearance, sheep are stockier as compared to their relative the goat, but its horns are more contrast if present. It has scent glands in the face and rear legs.

The males do not have beards as goats and generally have short tails. Sheep provide meat (lamb, mutton, or hogget), fleeces, and milk. It gives pelts, used as dairy animals and sometimes as model organism’s science, so it is a multi-use animal.

The wild species have the special ability that helps the outer coat take the form of hair and underneath lies a short undercoat of fine wool that has been resulted in the fleece of a domestic sheep.

The sheep have four separate stomach compartments that help in thoroughly digesting the food by recapitulating so they prefer grazing on legume or grass vegetation that is fine and short. Sheep being shy in nature, prefer to graze in flocks.

Usually, the sheep become adults at the age of one, but some breeds of sheep mature at the age of about one and half years. They mostly birth a single lamb and two occasionally. At the age of 4 or 5 months, the lambs stop suckling and begin to graze. The mature sheep meat is mutton and that of an immature animal is lamb.

The need for selecting wool types, flocking instincts, and economically important traits have given more than 200 distinct breeds of sheep worldwide. Some of them are:

In this article, we have shared information about the characteristics, breed, and facts of sheep. Sheep is one of the oldest animals to be domesticated by humans and has been a part of human life helping them with different things such as meat, milk, and fleece. We are sure this information will help in better understanding the breeds of sheep as well as their facts and characteristics. 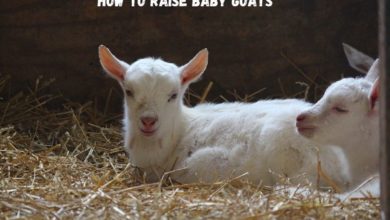 Raising a Baby Goat: How to Raise Baby Goats?