A habitat is an environment that provides a favourable surrounding for some particular type of animal species. The atmosphere, climate, components, etc. of a habitat acts as a support system for different types of animals based on habitat to survive in a particular environment.

There are different habitats on Earth that provide shelter to thousands of animal species. You will understand in this article all the information about the different types of animals based on habitat.

Classification of animals based on their habitats

The different types of terrestrial animal habitats are as follows

The tropical rainforest is an ideal habitat to have a wide range of animal species. Tropical forests are generally situated around Earth’s equator in South Africa, America & Southern Asia. The main characteristic of this habitat is the humidity and heavy rainfall which make it one of the favourite places for animal survival.


One of the best characteristic features of temperate forest habitat is that here you will find well-defined four seasons (i.e. summer, winter, rainy, and spring seasons) annually.


The most common types of animals based on habitat at temperate forests are elk, marmots, bears, deer, lynxes, owls, etc.

Tundra region is found in the Arctic where the climate is too cold and windy. This is why you can see very hardy flora and fauna species living in the cold climate of the tundra region.

Grassland is a home for thousands of animals and birds. There are two different types of grassland habitat which are found on the Earth.

Another name for Tropical Grassland is African Savana. This types of animals based on habitat is enriched with widespread grass fields & long trees. This region receives an average rainfall up to 30 to 50 inches annually. After this season, tropical grassland experience a lengthy dry season.

This types of animals based on habitat are more or less similar to tropical grassland (except it experiences warm season followed by cold winter season). The average rainfall recorded annually in temperate grassland is approximately 30 to 35 inches. Great Plains of the Midwest and Palouse Prairie (America) are excellent examples of temperate grassland.


Temperate grassland is a natural habitat for animals like gazelle, rabbits, deer, mice and various species of snakes, etc.

Deserts are dry regions that receive annual rainfall less than 10 inches. This types of animals based on habitat have a special adaptation to survive in the adverse climatic conditions of the desert region. Some animals live in burrows or caves, whereas some other animals have adapted the lifestyle of nocturnal animals.

Camel is no doubt the king of deserts. Apart from camels, other animals like kangaroo, fox, antelope, goats, coyote, jackrabbit, snake, various species of lizards, etc. are found in the desert habitat.


Mountains are the high landforms from the surface level. Mountain habitat has a relatively colder climate as compared to plains. The animals that live in mountain regions have in-build features to survive in such a cold habitat.

Aquatic animals are the ones who live in water. The aquatic ecosystem provides a natural habitat to millions of flora and fauna. In aquatic habitat, you will find animals of different sizes, colours, behaviours, features, etc. Aquatic animals habitat is divided into two types.

71% of Earth’s surface is covered with water but only 3% of it is considered as freshwater. Freshwater habitat includes rivers, streams, lakes, ponds, etc. which shelters different species of water animals.


A wide range of animals lives in rivers and streams such as otter, river turtle, whooper swan, mallards, dolphins, and various species of fishes, etc.

Animals that spend most of their time on trees are termed as arboreal animals. They perform most of their activities on tree canopies like eating, sleeping, playing, etc.


Amphibians are the animals that live on both land & water. They are carnivorous animals and they depend on small animals like insects, slugs, snails, etc. for their diet.

The animals like frogs, salamanders, toads, etc. comes under the amphibian group of animals.


Birds come in aerial animals as they fly in the air. However, they also spend some time on trees. There is a huge variety of aerial animals like crows, pigeons, sparrow, eagle, etc. 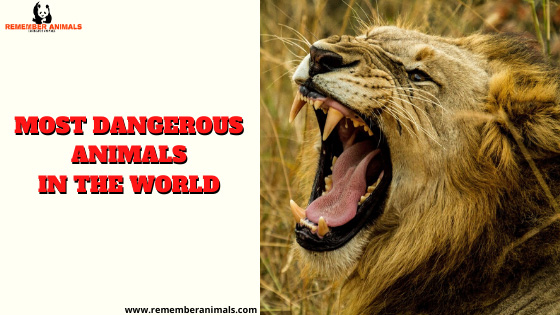 Most Dangerous Animals in the World